We play Catholic Trivia over on Instagram each month. These are the questions and answers to this month’s #4thFridayTrivia game.

In the Bible, numbers often (though not always) carry great significance.

In honor of the Trinity, these Catholic Trivia questions revolve around the theme of the number three.

How much do you know about the threes in the Catholic faith?

God is a Trinity – meaning he is three persons, in one God. This is the fundamental mystery of the Catholic faith!

The Trinity was revealed at Jesus’ baptism.

And when Jesus was baptized, he went up immediately from the water, and behold, the heavens were opened and he saw the Spirit of God descending like a dove, and alighting on him; 1and lo, a voice from heaven, saying, “This is my beloved Son, with whom I am well pleased.”

In these verses, we hear the voice of God the Father, we see the presence of the Holy Spirit manifested as a dove, and we hear Jesus proclaimed as the Son of God!

It’s amazing, and important, that at the start of Jesus’ earthly ministry, the first thing that is revealed is the Trinity.

The whole history of salvation is identical with the history and the means by which the one true God, Father, Son, and Holy Spirit, reveals himself to men “and reconciles and unites with himself those who turn away from sin.”

As signaled by the manifestation of the Trinity at Jesus’ baptism, we enter into God’s life at our own baptism. We are reconciled with him, and united to him – all of him – Father, Son, and Holy Spirit.

Faith, hope, and love (or charity) are the three theological virtues. These are the virtues that help us relate to God.

The theological virtues are the foundation of Christian moral activity; they animate it and give it its special character… They are infused by God into the souls of the faithful to make them capable of acting as his children and of meriting eternal life.”

In the Bible, St. Paul talks about these three great virtues. All three are vital to living a holy life here on earth. However, both faith and hope will be realized in heaven, and only love will remain.

So faith, hope, love abide, these three; but the greatest of these is love.

Charity is the source of all Christian virtue. All the good practices of the Christian life arise out of love.

3. What are the 3 sacraments of initiation?

A: Baptism, Confirmation, and the Eucharist.

The sacraments of Christian initiation – Baptism, Confirmation, and the Eucharist – lay the foundations of every Christian life.

These sacraments are the bedrock of Christian life.

4. What are the 3 oils blessed at a Chrism Mass?

A: Oil of the Sick, Oil of Catechumens, Chrism.

When I was in high school, we had the opportunity to attend the Chrism Mass in our diocese each year.

It was always a beautiful and important Mass!

At the Chrism Mass, the three oils: Oil of the Sick, Oil of Catechumens, and Chrism, are blessed. These three oils play an important part in the rituals of conferring the sacraments on the Christian faithful.

The Oil of Catechumens is used at baptism.

The sacred Chrism is used at baptism, as well as confirmation and holy orders.

You can read more about the Chrism Mass here.

5. Which 3 Gospels are the Synoptic Gospels?

A: Matthew, Mark, and Luke.

Synoptic can be taken to mean “synopsis” – as in these three Gospels, together, provide a synopsis, or overview, of the life and miracles of Jesus.

Alternately, the word synopsis can be taken to indicate “same lens,” attesting to the fact that these three Gospels are derived from the same source of information.

The similarities in these Gospels is apparent in their arrangement and content, though you can find elements that are distinct to one of the Synoptic Gospels, or common to only two.

The Gospel of John is distinct from these three Gospels in its presentation, organization, and themes.

To learn more about the synoptic Gospels, check out this article from Catholic Answers.

A: Jacinta, Francisco, and Lucia.

In 1917, Mary appeared to three children in Portugal: Jacinta, Francisco, and Lucia.

She appeared to them six times. Thousands of people witnessed the miraculous signs given there.

Jacinta and Francisco both died at a young age, and have been canonized Saints! Lucia lived to see their canonization.

You can read more about the Fatima children and the apparitions here.

7. What are the 3 sources of authority in Catholicism?

A: Scripture, Tradition, and the Magisterium.

This is one of the things I love about the Catholic Church. We don’t depend on the Bible alone to know the truth.

I think that’s a good thing, because there are countless times I open the Bible and wonder what in the world is going on?!

It’s comforting to know that I don’t have to try to interpret it on my own and hope for the best.

Heck, even the Bible tells us we don’t need to rely totally on the Bible.

So then, brethren, stand firm and hold to the traditions which you were taught by us, either by word of mouth or by letter.

There are plenty of traditions that were passed on by word of mouth for years before they were written down!

So there’s tradition, but what about the Magisterium?

While some may balk at the notion of today’s men having teaching authority, the succession of teaching authority is, in fact, Biblical. In Luke chapter 10, Jesus appointed and sent seventy teachers out into the world.

He who hears you hears me, and he who rejects you rejects me.

Rather, the purpose of the Magisterium is to help clarify and interpret the truth that’s found in Sacred Scripture and Tradition.

“The task of giving an authentic interpretation of the Word of God, whether in its written form or in the form of Tradition, has been entrusted to the living, teaching office of the Church alone.”

If you want to learn more about the Magisterium, head on over to the Catechism, starting at paragraph 85, and read up on it!

Anybody have flashbacks to grade-school Catechism lessons with this question?

The very first lesson in the St. Joseph First Communion Catechism discusses why God created us.

This threefold answer is one that’s committed to memory by so many children during Communion preparation, I had to bring it back!

First of all, God created us to know him. We can’t love or serve whom we don’t know, so we have to come to know him first.

Then, most importantly, we must love God. God doesn’t force us to love him, but he desires us to freely choose to love him!

Finally, we show our love for God in our service of him. The good news is, God doesn’t desire us to serve him as his slaves, but as his friends.

Service of God is in the form of loving him and loving our neighbor.

Knowing, loving, and serving God are our necessary tasks on the path to heaven. It’s for this reason, I’m so excited to be hosting Catholic Trivia on Instagram each month, to help encourage you to grow in knowledge of God!

9. Which three apostles witnessed the Transfiguration?

The Transfiguration is related in the Synoptic Gospels (Matthew 17, Mark 9, and Luke 9).

The Gospels record that Jesus took Peter, James, and John up on a mountain alone.

He was transfigured before him. The three apostles were afraid of this vision – this beautiful and amazing revelation – this foretaste of Jesus in his glory.

“Tell no one the vision, until the Son of man is raised from the dead.”

At the time, these three apostles knew that they were in on some sort of big secret concerning what was in store for Jesus in the future, but they didn’t know what it was.

It’s interesting to notice that the same three apostles: Peter, James, and John, are the three selected by Jesus to accompany him in his agony in the Garden (found in Matthew 26, Mark 14, and Luke 22).

These three apostles saw Jesus at his highest and his lowest – arrayed in glory, and sweating blood in fear.

Witnessing the Transfiguration strengthened Peter, James, and John to witness and endure the Passion of Jesus.

10. What is the name given to the 3 consecutive days celebrating Christ’s Paschal Mystery.

A Triduum is a period of three days.

The celebration of the Paschal Mystery in the Liturgy is commonly referred to the Triduum on the Liturgical calendar.

Remember that in the Jewish culture, days start at sundown.

So, the Triduum technically starts at Sundown with the Mass of the Lord’s Supper on Holy Thursday.

Thursday evening to the evening on Good Friday – the first day.

So, the Triduum adds up to a total of three days, encompassing Holy Thursday, Good Friday, Holy Saturday, and Easter Sunday.

In the Eucharist Christ gives us the very body which he gave up for us on the cross, the very blood which he “poured out for many for hte forgiveness of sins.”

Have you ever noticed that there’s no closing blessing or dismissal on the Holy Thursday and Good Friday services?

I could go on and on about the Triduum, but I’ll leave it there for now. If you want to dive in more, head on over to the Catechism. You can start off in the section on the Paschal Mystery, but there’s so much to explore!

WANT TO KNOW WHEN THE NEXT ROUND OF TRIVIA IS HAPPENING?

Did you know that we play Catholic Trivia live on Instagram every month?

Sponsors offer prizes that YOU could get a chance to win – just by playing along!

If you enjoyed testing your knowledge of the Catholic Faith and learning a few new things, sign up to get an email reminder (and other blog news) so you can play along for next round of Catholic Trivia on Instagram! 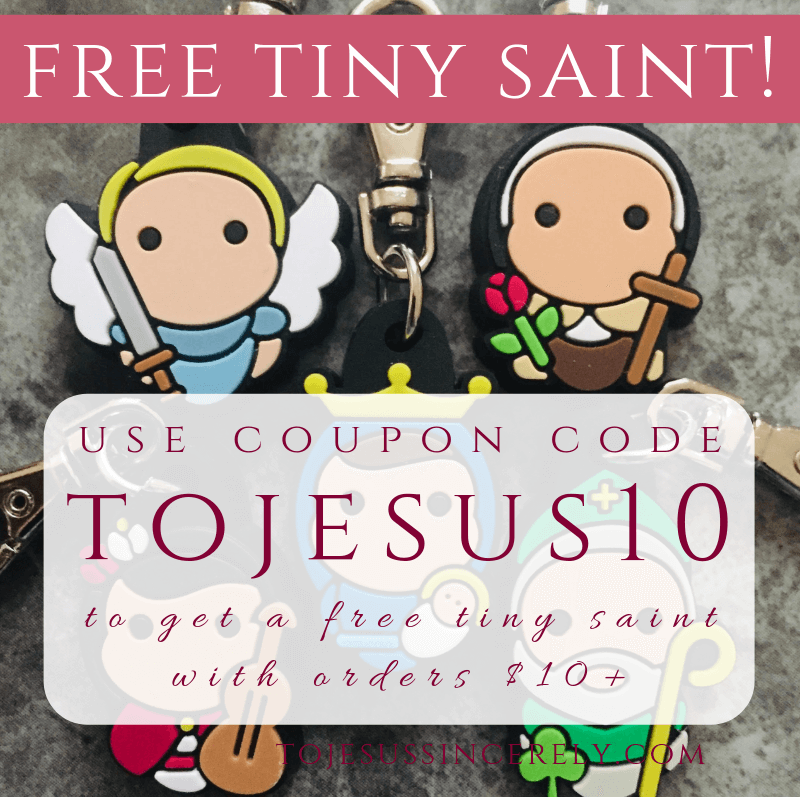